The Intellectual Freedom Committee is concerned with the rights of freedom of expression, and stands ready to assist in situations where these rights may be in danger and is responsible for arranging the John Swan Memorial Lecture.

Please use VLA’s Challenge Reporting Form to let us know if  your library has received a challenge to library materials or programming.

The ALA Office for Intellectual Freedom provides confidential support to anyone undergoing a challenge or ban. Support can come in the form of letters, book reviews, resources, talking points or emotional support. Report censorship online or by calling 1-800-545-2433, ext. 4226.

Banned Books Week is an annual event celebrating the freedom to read. Typically held during the last week of September, it spotlights current and historical attempts to censor books in libraries and schools. It brings together the entire book community — librarians, booksellers, publishers, journalists, teachers, and readers of all types — in shared support of the freedom to seek and to express ideas, even those some consider unorthodox or unpopular.

The books featured during Banned Books Week have all been targeted for removal or restriction in libraries and schools. By focusing on efforts across the country to remove or restrict access to books, Banned Books Week draws national attention to the harms of censorship. 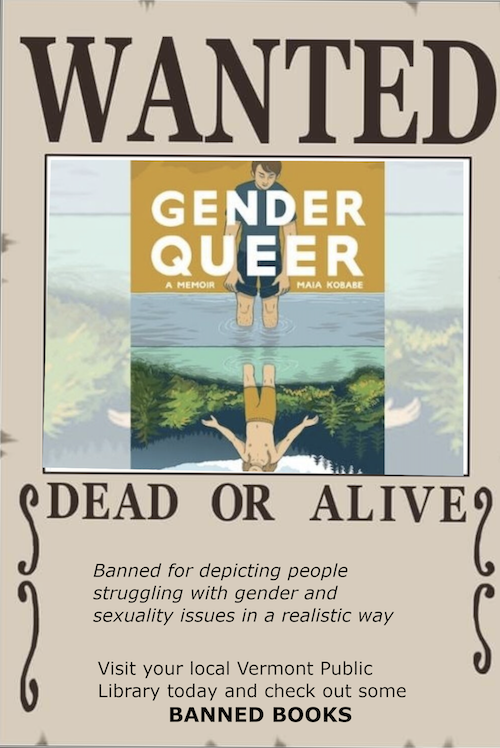 Library Freedom Project (video hosted by Kingdom Access Television) a virtual lecture about surveillance capitalism and connecting privacy issues to the work we do as librarians. Recorded June 4, 2020.

Privacy in an Age of Surveillance Capitalism: Join us as we explore the importance of privacy on the Internet. Learn about role libraries play in protecting your online freedoms and steps you can take for protecting your data and your privacy. Given in the town hall in Shelburne , VT April 12th.

YouTube video of Slate writer Peters, author of The Idealist: Aaron Swartz and the Rise of Free Culture on the Internet, speaking on the role of free culture, libraries, and liberty in America. Given at the O'Brien Community Center in Winooski, VT on April 15, 2016.

YouTube video of Sova's lecture on the current state of attempts to limit intellectual freedom in America in comparison to mid-20th century attempts. Given at the Pavillion Auditorium, Montpelier, VT on January 27, 2014.

Finan talks about his book, From the Palmer Raids to the Patriot Act: A History of Free Speech in America, in which he speaks about VLA being the first sign of hope in the fight against the USA PATRIOT act. Given at Sherburne Memorial Library, Killington, VT on August 25, 2011.

A New Vision of Citizenship For a Fast-Globalizing and Ecologically Challenged World by Laurie Lane-Zucker, given at Brooks Memorial Library, Brattleboro, VT on June 9, 2005